Can you go home again?

Thing 2 was given a choice of summer camps this year.  She had decided to take a cupcake making class, but one little post card changed her mind (she’s a marketer’s dream).  She went from cupcakes to the in-no-way similar rock climbing camp.  And she had a blast. 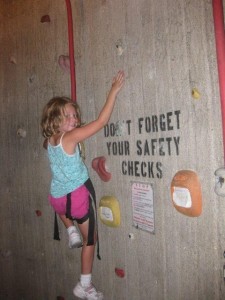 The camp took place in a converted grain silo with an amazing amount of space and a huge variety of climbs.  The first day of class she climbed to the top of the practice area, about 20 feet, but she wouldn’t climb very far in the silo.  By the end of the week, she was going to the top of the belayed climb, which seemed halfway to the moon.  The full silo climb is 65 feet, but I don’t think her climb was quite that high because of the belay equipment at the top.  She also did bouldering, zip lines and cave work.  Pretty amazing for the girliest 7 year old you’ll ever meet. 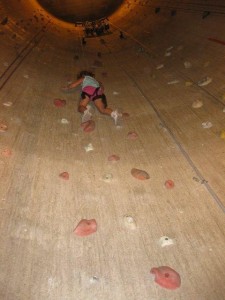 This place offers family climb nights, and I think we’ll be trying it out when the weather gets yucky and we can’t think of anything else to do.  I don’t kid myself by thinking I’ll climb as high as she did though.  I’ll be lucky to drag my body 2 feet off the ground. 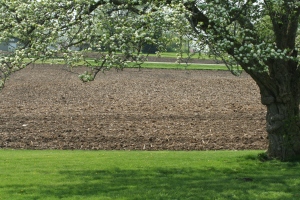 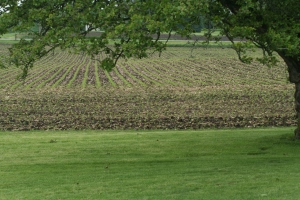 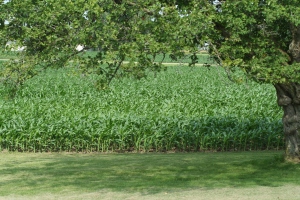 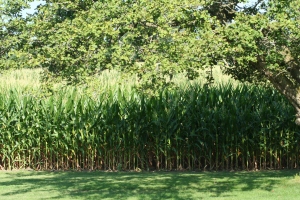 I went for a run a couple of weeks ago, and as I was coming around a curve I met a doe and two fawns.  The doe darted across the road and into the timber, but the fawns seemed to be more interested in playing tag.  They’d run ahead a little, duck into the timber and pop up behind me.  At one point, one of them got close enough that it was almost touching me.  I’ve got a rather healthy fear of being between anything and its mother, so I sort of yipped (I’d like to pretend it was some sort of formidable noise.  It wasn’t.) and we went skittering off in different directions.  Although both fawns continued jumping in and out of the corn and the trees, they stayed pretty clear of me after that.

Yesterday morning I went for a bike ride in the same area and again saw a doe and two fawns.  I’m assuming it’s the same group, but I really don’t know.  It’s not like they were wearing name tags.  They were running next to the road, through a bean field.  Even on a bicycle, I couldn’t possibly have kept up with them.

You know with the running and the bike riding, I sound rather athletic.  I’m not.  It’s actually more shuffling than running.  And any time I’m riding the bike, I have a continous Wicked Witch of the West/Peewee Herman theme song running through my head.  Which is why I’m generally laughing my head off for no apparent reason as I go down the road.  It’s a good thing there isn’t much traffic other than the deer. 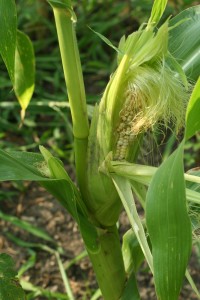 Those damn raccoons.  Seriously.  It’s not bad enough that they pull down the husks on the sweet corn to see if it’s ready.  ‘Cause even if they don’t eat it, I’m not interested in raccoon rejected corn that’s now been exposed to every bug in the neighborhood. 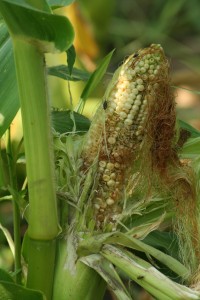 Sometimes they get partway through before thinking, “Meh.  Not that great.” Then they move on to the next ear, hoping it’s got a better raccoon approved flavor, leaving the half eaten ear to taunt me with what could have been. 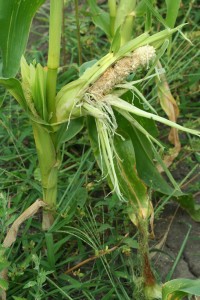 Sometimes they find an ear that’s just about perfect.  And they shred the hell out of it in sheer excitement. Then they apparently put out the word to any bug not already busy with wrecking the rest of our garden.

They’ve been spraying corn for the last couple of days via airplane.  The corn is too tall to use the sprayer, and this is the time to get the fungicide on. 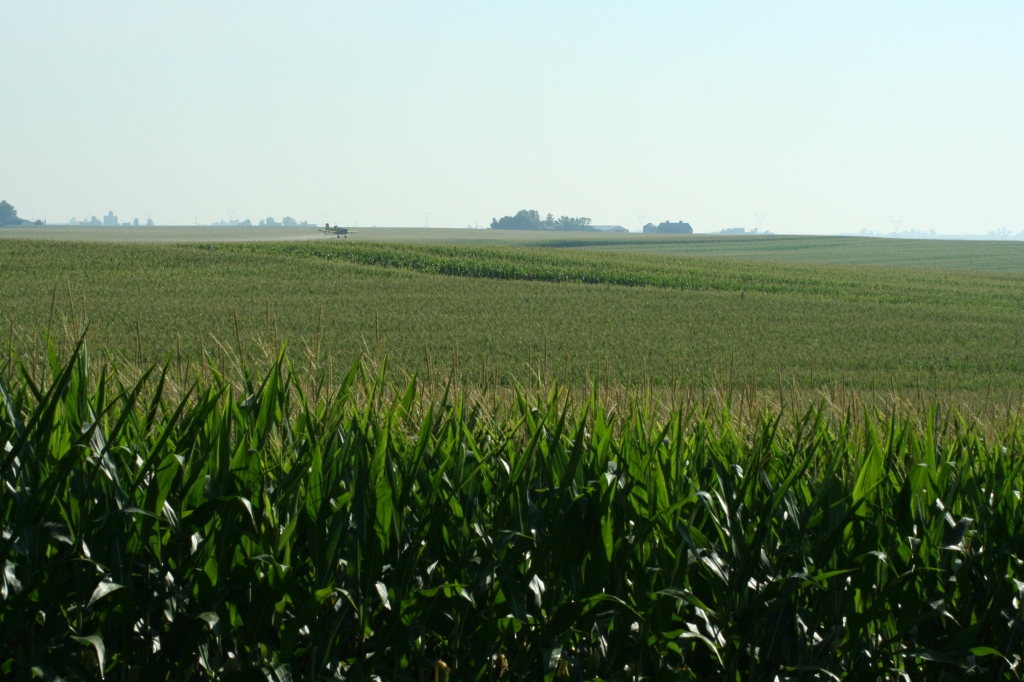 Yesterday it was RIGHT over the house.  As in ‘He’s so low I can’t believe he missed the power lines.”  I’d heard him spraying the neighbor’s field earlier, but didn’t realize we were next on the list.  I jumped, the cat jumped, the windows rattled and things fell off shelves.  Not what you’d expect at 10:30 on a quiet Sunday morning.

Today they’re spraying again, and we’ve got trucks here emptying the bins.  Weeks go by without anyone here, but today looks like a hive of activity.  If I were a nice sister, I’d make cookies for the people working in the bins.  It’d be a little hard to get them up to the pilot.  Well actually, I suppose he could stick his hand out the window and I could slap the cookies in as he flew by.  Did I mention he’s flying REALLY low?  We’ll see what happens. 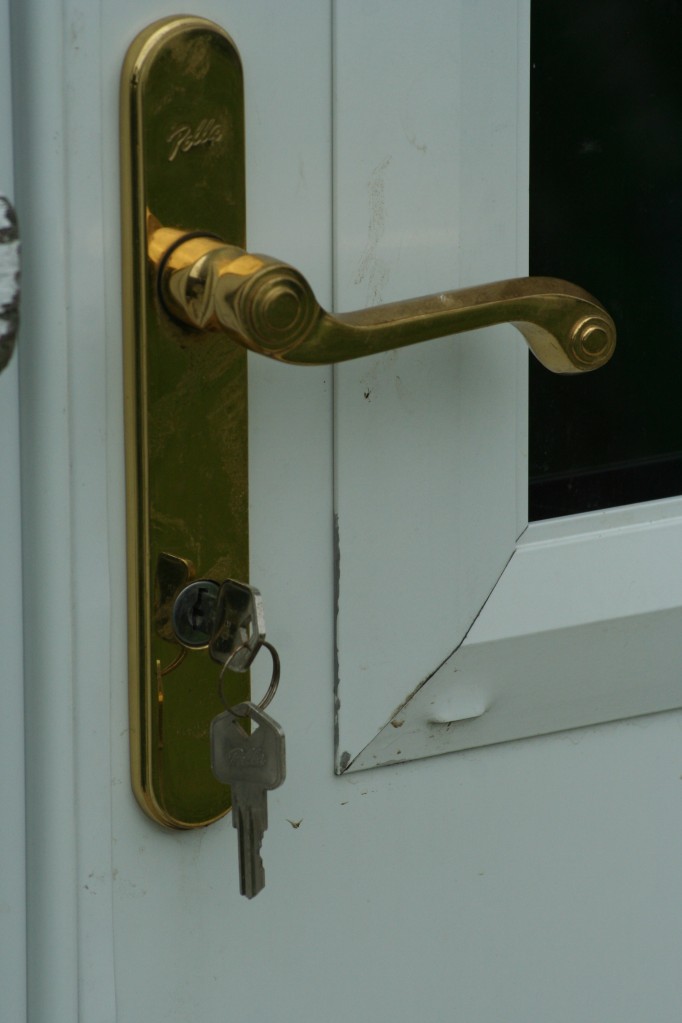 Yeah.  That’s the key to the door.  In the lock.  On the outside.  Where we keep it.  See, we never used to lock all our doors.  At the old house the back door was locked, but the front door never was.  It did stick, so unless you knew right where to kick it, you’d assume it was locked.  At this house the front door is usually locked.  It has one of those fancy bathroom stall door locks where you slide the little bar over and drop it down.  Its only function is to keep the door from flying open on windy days.  I can’t imagine it would be hard to pick as there’s a good sized gap in the door right where the bar goes across.  But why bother?  The back door is unlocked.  Or it was.

Buster sleeps on the back porch, usually at night, but occasionally during the day when his regularly scheduled napping spots are unavailable due to wind or rain or sun or low barometric pressure.  Unfortunately, he recently discovered how to let himself out.  I don’t really have a problem with the going out per se, it’s the wanting back in at 2am that drives me nuts.  He’ll bark and bark and BARK until I trot down to let him in.  So I started locking the door.  Until he develops opposable thumbs, it keeps him inside during the night.

I also decided that when we’re not home, he should stay on the porch because our LP guy recently had a not-so-pleasant encounter with a couple of farm dogs that left him in the hospital for a few days, and off work for quite awhile.  And when it comes to propane, I’ll do anything to make sure we don’t run out.  He hasn’t asked us to corral Buster, but I think it’s the nice thing to do.  So, when we’re gone for awhile, I’ll lock Buster on the porch.  However, none of us are good with keys and honestly, what if someone needed something from the house?  I’d hate for a family member or perfect stranger to not be able to get in if they needed a quick bathroom break, a glass of water, or if they had an overwhelming need to do a load of my laundry.

Sure we could put it under the mat, but a.) we’re likely to forget that’s where we put it and b.) Buster is likely to pull it out from under the mat and parade around the yard with it until he accidentally swallows it.  So if you need it, you know where it is.  And please, don’t forget to throw some laundry in while  you’re robbing the place.

Today I had to stop at an intersection and wait for three (three!) cars to pass.  Well, actually it was one car, one truck pulling a load of seed, and one sprayer.  Even more amusing?  They were the only vehicles I saw moving the whole time I was in town.

I found an old map case in the attic.  I assume it’s a relic from the schoolhouse across the way, but I don’t really know.  It seems a little old for that.  One of the posters is copywrited in 1904, and can only be described as ‘pro-prohibition’. 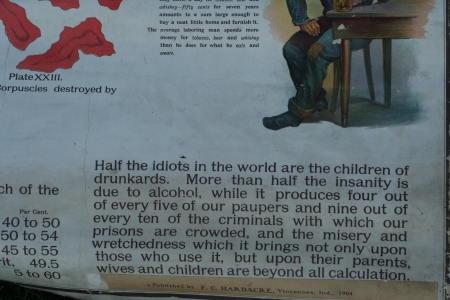 That seems a little strong, doesn’t it?  So does this: 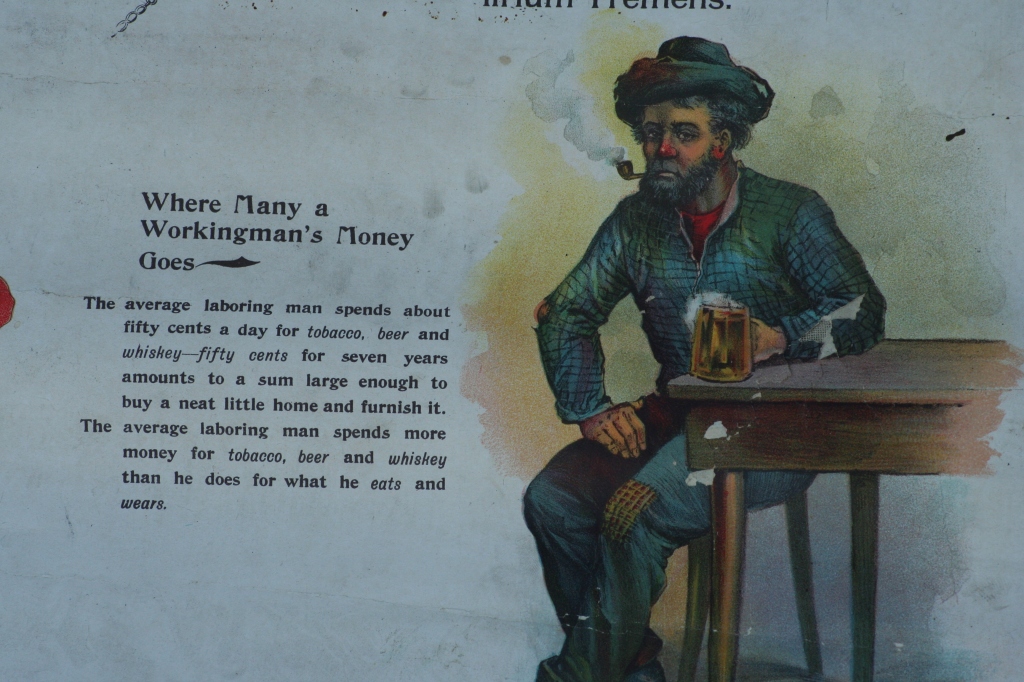 I wonder what sort of fact checking they did in the early 1900’s. 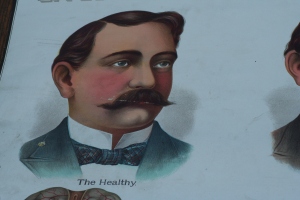 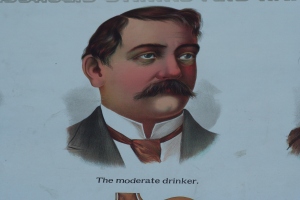 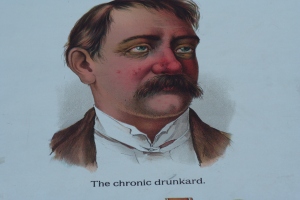 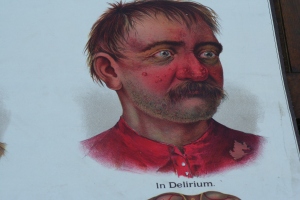 I wonder if this is the 1904 equivalent of “This is your brain on drugs.”  Frankly, it’s more entertaining than it is frightening, but maybe the thought of appearing in public in a red undershirt was a deterrent in 1904.  It’s interesting that women are barely mentioned, this is clearly aimed at the men of the era.

It’s springtime here on the farm.  It’s time to for Dad to work the ground: 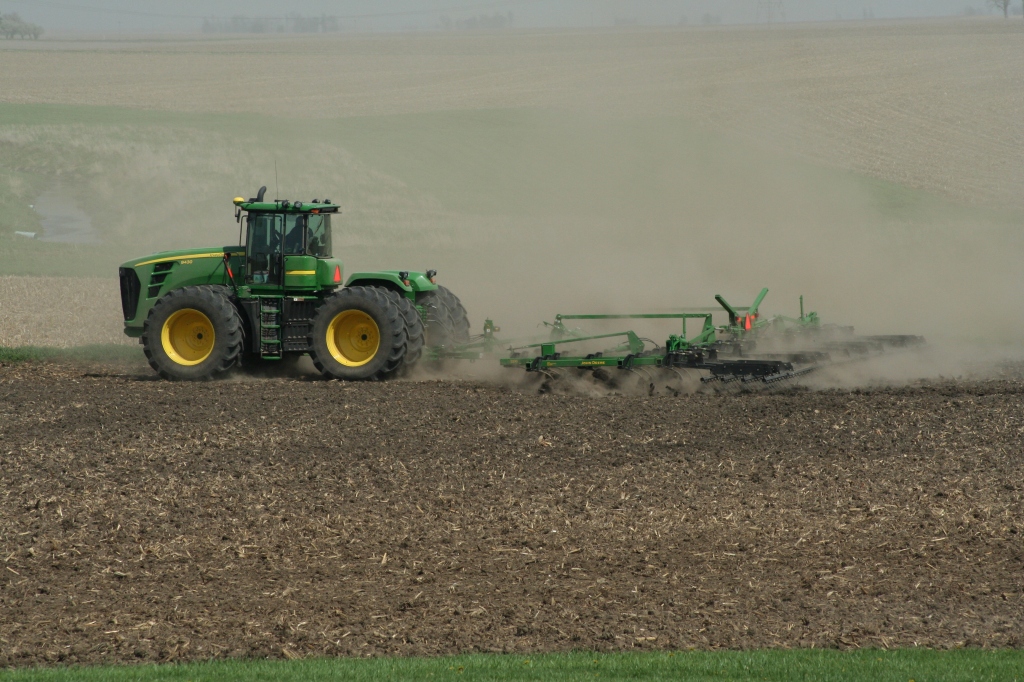 I do NOT miss the days when it was my job to wash the tractors.  Although they were never as bad as the combine.  That was a dirty scrungy mess to clean, and there is no way to do it without getting pretty scrungy yourself. 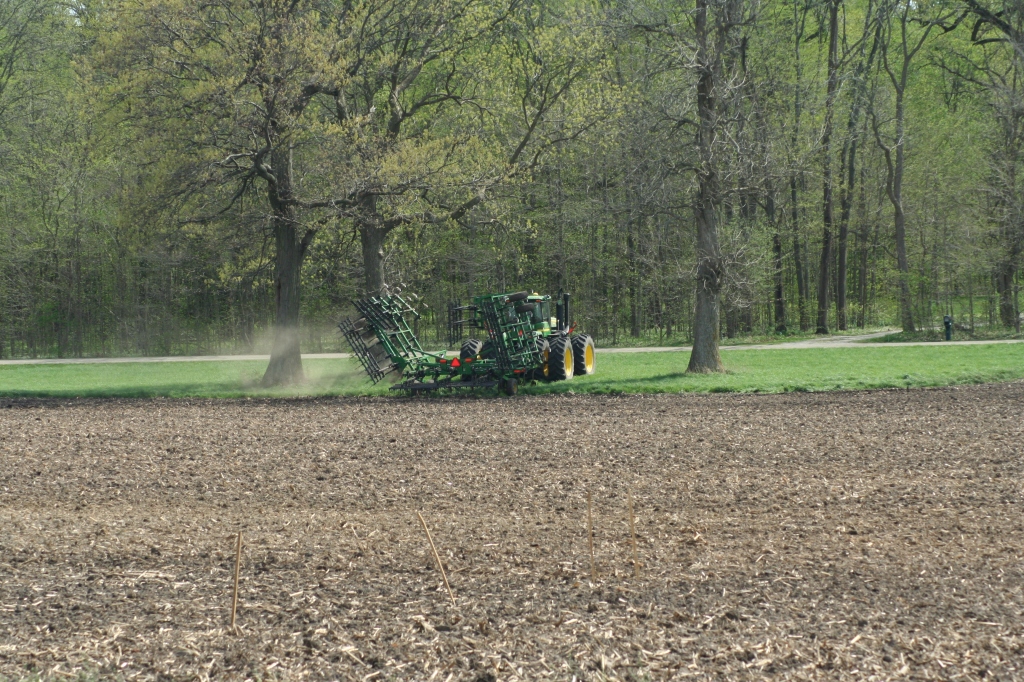 When they’re ready to move to the next field, the sides of the implements fold up to make it easier to travel down the road.  Well, and it keeps them from taking out every sign on both sides of the road between this field and the next.

After the ground has been worked, they’re ready to plant. 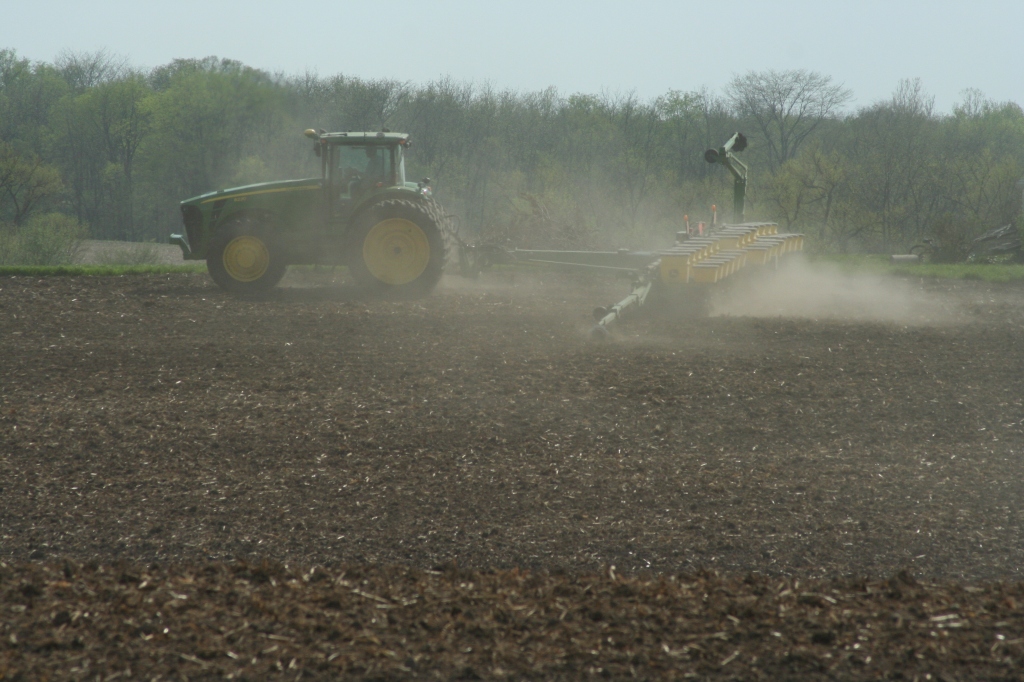 Here my brother is planting end rows, the rows around the edges of the field.  The tractor is run manually while doing the end rows, so the marker is down on this side of the planter to make a rut so he can see where to plant the next pass. 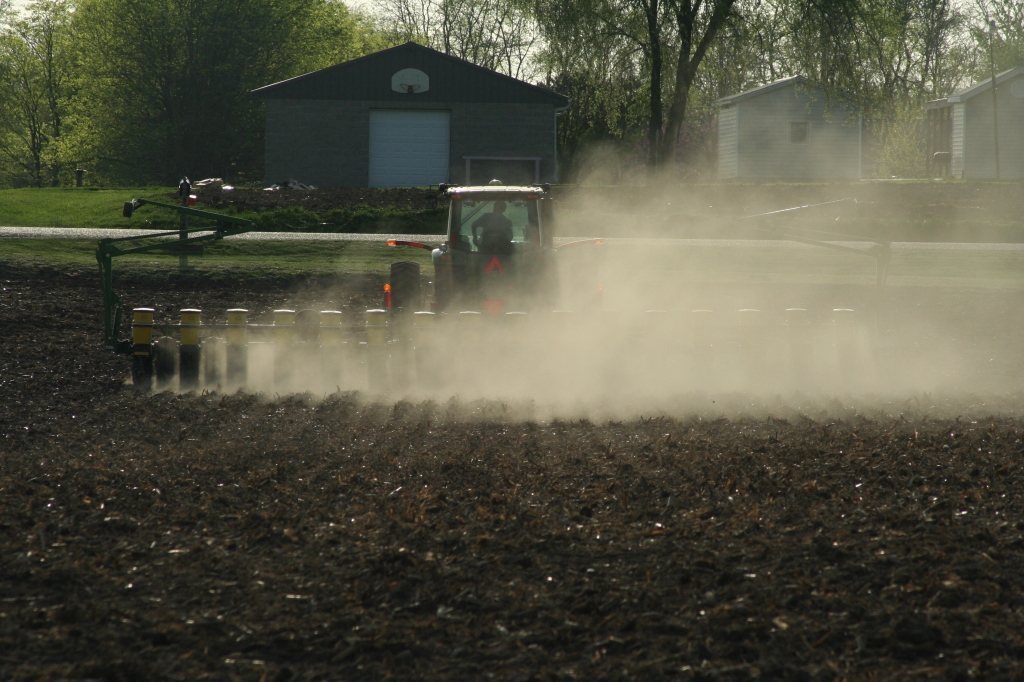 The markers are up on both sides here because the tractor is steering by GPS.  The computer calculates where the tractor needs to be in this pass in relation to where it was in the last one and moves accordingly.  The driver only needs to turn at the end of the field and then the steering takes over.  The system also has a handy alarm as the tractor approaches the end of the field just in case the driver isn’t paying attention. 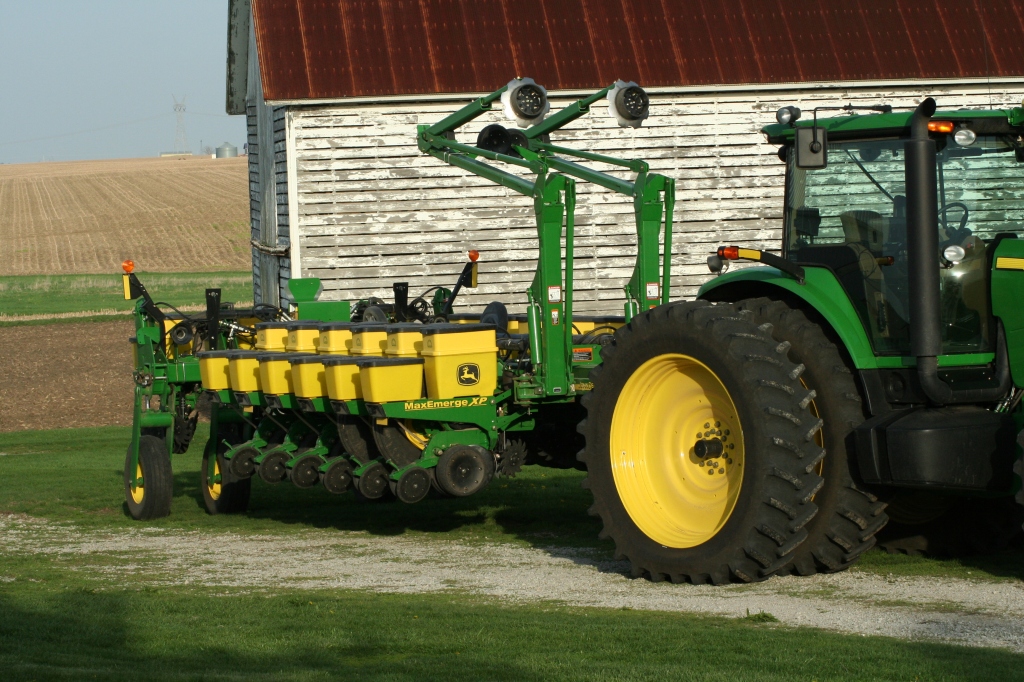 The planter folds too, otherwise it would be much too wide to go down the road.  Corn seed comes in sacks (think a giant bag of dog food), and is loaded by hand into the yellow bins.  It didn’t occur to me at all to get pictures of that.  I’ll try to get some shots before they finish.

Saturday night we had a spur of the moment picnic at Harper’s, a farm located a mile or so from our house.  It’s where we did this last fall.

These picnics usually go like this:  Someone decides to have an outing within the next couple of hours.  Some frantic phoning begins where we call whoever happens to cross our minds and whoever can come shows up. 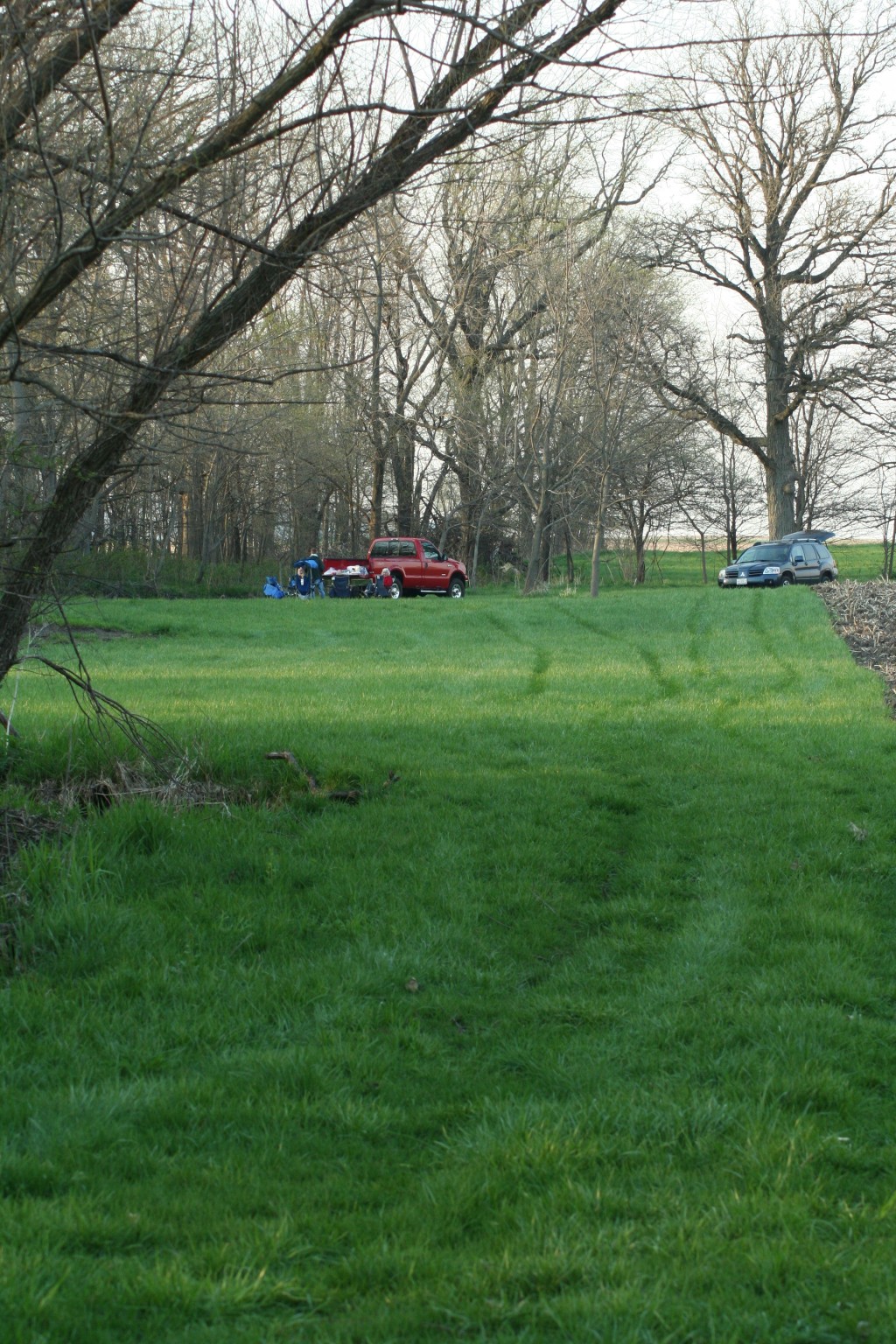 Everyone brings their own chair, drinks and food.  Sometimes we go as far as having a fire, and people bring hotdogs etc.  Usually though, it’s just whatever people happen to drive through on the way.  Oh, and everyone always seems to bring a dessert.  There were 13 of us Saturday and we had three desserts.  Actually, when Pete’s involved, no one really needs to bring anything.  He’ll have enough food, drink and chairs, napkins, garbage bags, plastic silverware, plates and whatever else crosses his mind to take care of the whole town.

The kids play in the timber and come home muddy, damp and very very tired. 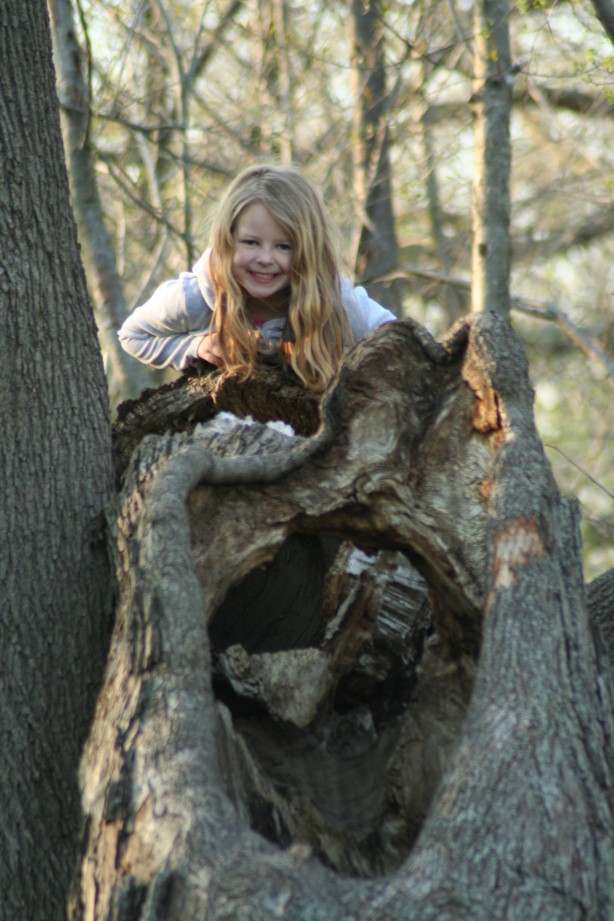 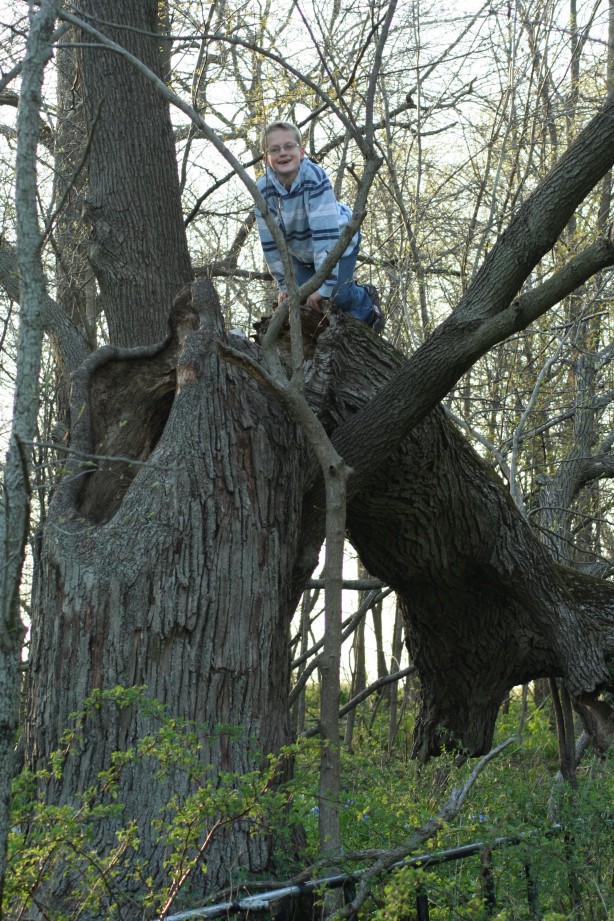 Buster usually has a blast sniffing everything in sight, although he is careful to take breaks to remind everyone how close he is to fading away for lack of food. 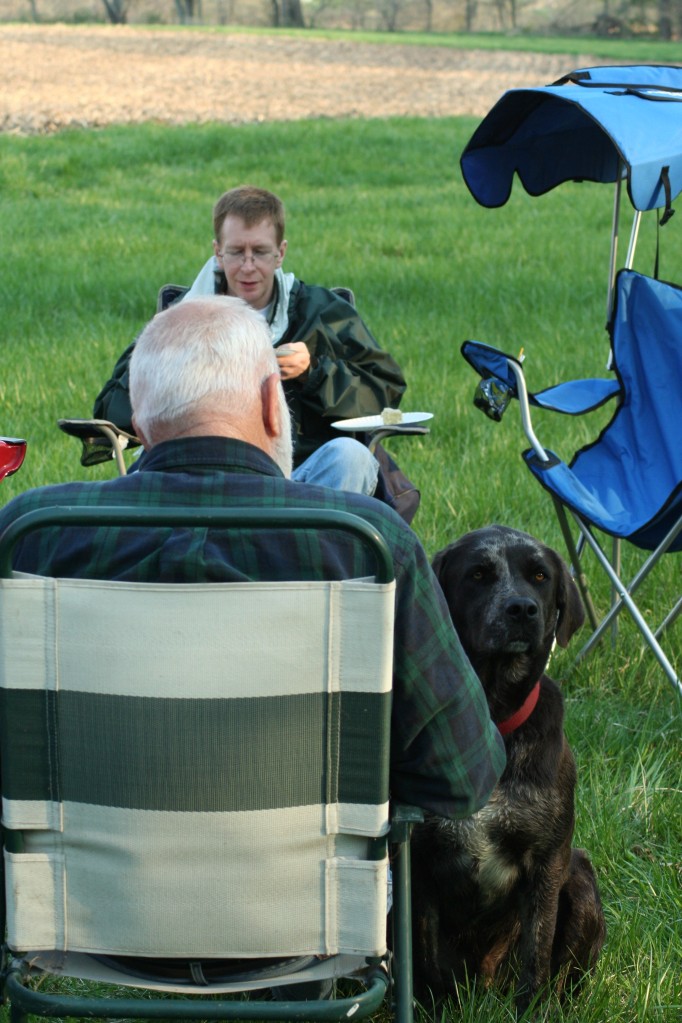 I thought for a minute or two about crossing this log: 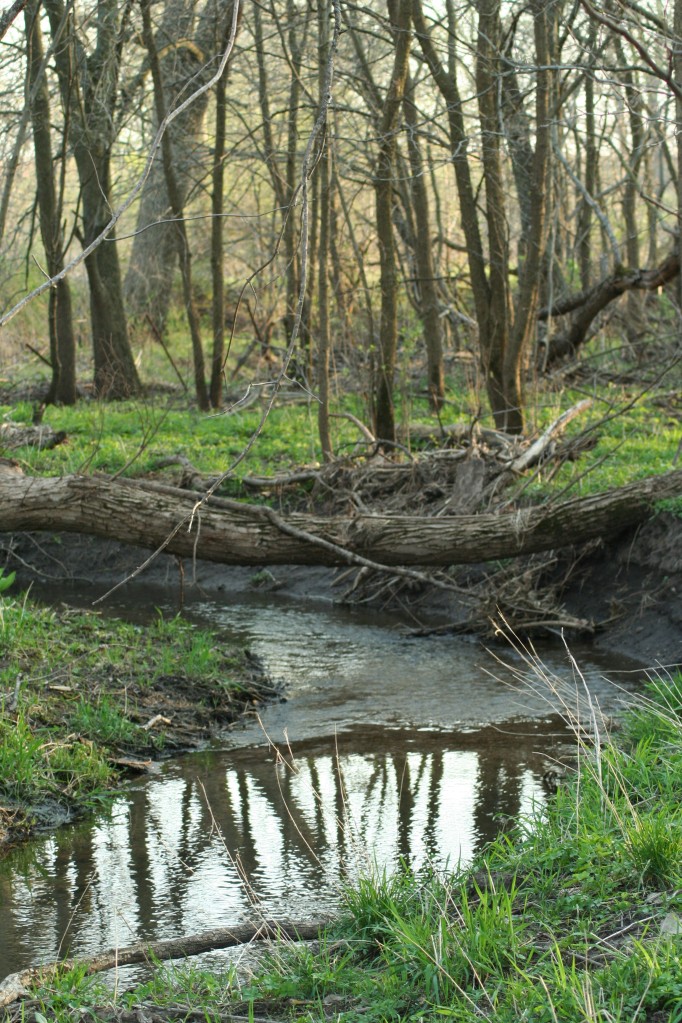 But I came to my senses before I got halfway across.  Actually it was the camera holding me back.  I wouldn’t mind falling in (well, not that much) but I’d be really irritated if I ruined the camera.